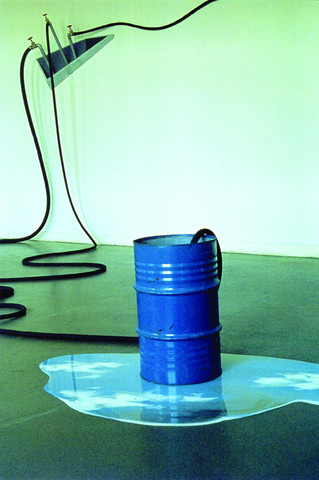 In the mid-Sixties, Tsoclis focuses his interest on the object and creates the series Objects – Situations (1966-1973), with which he gains international recognition. At the time, Nouveau Realisme and Pop Art prevail in Paris while Art Povera is also gaining ground. Tsoclis gets to know the doctrines of these movements, but he handles the object in his own personal way. He uses ready-made objects such as tables, chairs, ladders, doors, slabs, taps, tubes or he constructs real-looking objects, and by using renaissance perspective and the art of trompe l’oeil he creates new, poetic images, which often border on Surrealism. Recognizable objects are transformed and given new meaning via the use of bold color, the way they are situated in the space, and via unexpected combinations.